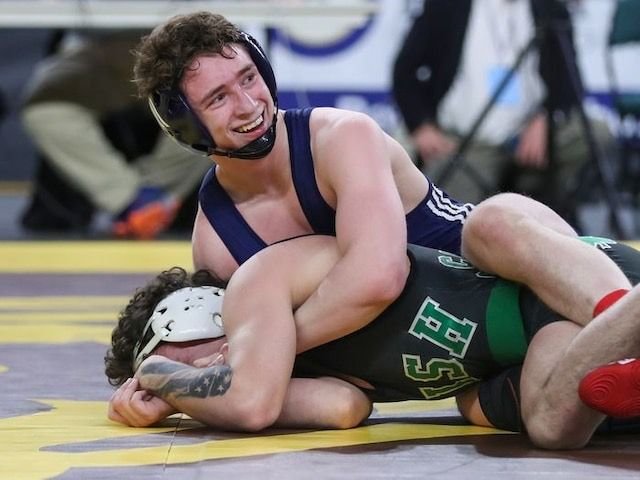 By Mak Ojutiku | NJ Advance Media for NJ.com
Beating a top-seed in the state tournament with a defensive pin is pretty rare, to say the least.
Thanks to a move Toms River North fourth-seed Nick Boggiano calls “The Spider”, the rare became reality in the semifinals of the 152-pound bracket of the NJSIAA/Rothman Orthopaedics State Wrestling Tournament at Boardwalk Hall in Atlantic City.
Boggiano, a senior, used the move in bottom position to earn a fall over Lyndhurst top-seed Dylan Weaver, and to book his way to Saturday’s championship match.
“It’s just about staying confident and staying calm,” the Toms River North grappler said after the match. “There’s no point in getting all juiced up before your matches. You just gotta know your stuff and then go out and do it.”
With Weaver throwing legs in top position in the second period, Boggiano got himself into a back bridge, reached back with his arms and turned his own body around, to put the top-seeded Lyndhurst standout on his shoulders to secure the pin.
“I’m very flexible and I don’t really feel uncomfortable when kids throw legs,” Boggiano said.
Boggiano, an eighth-place finisher in last year’s 145-pound bracket, said he brought a different kind of focus into the semifinal than he had earlier in the season. The Toms River North standout credited his sole loss of the season, which happened to come at the hands of the loser of the other semifinal match, Camden Catholic’s Brandon Mooney, as a positive difference maker to his mentality.
“It helped me focus.," the 39-1 wrestler said. "The loss brought me back down, and I knew it wasn’t gonna happen again.”
While Boggiano’s win was impressive for its sudden, shocking conclusion, Aaron Ayzerov’s victory was amazing for how long and hard fought it was.
Buy these 2020 Wrestling Championships photos: We offer reprints in a variety of sizes. Open the gallery above and select “BUY IMAGE” to purchase yours now.
To call the Paramus sixth-seed’s 1-1 ultimate tie breaker win a marathon would be an understatement.
Ayzerov and Mooney, the second-seed, traded escapes in the first two periods, and a third-period rideout by Mooney sent the match to overtime.
After a scoreless sudden victory period, and two rideouts, Ayzerov was given top position in the deciding ultimate tie-breaker. Ayzerov said just four words flashed in his mind as he took position: “Hold this man down.”
And hold him down, he did. In the very end, Ayzerov 's top game came through for him and gave him the victory and the finals berth.
“(Mooney’s) shifty and I know he’s good, but I’m best on top,” Ayzerov said after the match. “I’m not letting the match come down to my best position to just let it slip away. That was just mental toughness right there.”
The mental aspect of the sport is something that’s certainly not lost on Ayzerov. The 30-3 Paramus junior wrote the words “2020 152-pound state title” in a notebook every day since the end of last year’s season.
That mentality has brought Ayzerov a long way from his finish in last year’s state tournament, where he went 0-2.
“I came in here saying I was gonna win a state title, and I’m one step closer,"Ayzerov said. “I love these kind of matches, it’s what I train for. My partner and I go a half an hour extra every day to win matches like that. I believe (the win) is what I deserve. I work too hard to go and lose in overtime.”
Ayzerov and Boggiano will square off on Saturday at 3 p.m.