Updated Feb 08, 2020; Posted Feb 08, 2020
46 Pictures
Wrestling: Paramus Catholic defeats Paramus 42-17.
483shares
By JJ Conrad | NJ Advance Media for NJ.com
For much of Friday night, Issa Sebahie sat in the same spot – front row of the bleachers, just to the right of the scorer’s table – watching the same Paramus wrestling team compete on the same mat that his son, Alex, once dominated on.
Except on this night, the affable and elder Sebahie was not there cheering on his gone far-too-soon son, but rather for a night of honor and remembrance celebrating the life of one of the most decorated wrestlers in Paramus history – and that’s saying something in a program as storied as Paramus’ has been.
The Class of 2016 Spartans graduate died tragically in an auto accident early on New Year’s Day 2019 at the age of 21. He would have celebrated his 23rd birthday last Monday.
Instead, on Friday, Sebahie’s legacy and memory were honored by friends, family and former teammates, coaches and classmates – a tight-knit Bergen County community still in mourning after the fatal Paramus bus crash in May 2018.
But few in town personified #ParamusStrong more than Alex Sebahie.
To honor him Friday, a 52-second moment of silence was taken with his parents and three brothers in the center of the mat just prior to the 152-pound bout – a tribute to the weight class Alex wrestled at his senior year – and the Never Back Down Foundation took centerstage.
Both teams sported new Never Back Down memorial T-shirts and all proceeds from the night will be split evenly to create two scholarships for one Paramus and Paramus Catholic wrestler and awarded later this year.
The foundation itself was created in Alex’s name last year – in short time after his passing, too, thanks to the tireless work and effort put in by his mother, Rosie – to help turn tragedy into opportunity for local wrestlers and teams in need of financial assistance.
It’s exactly the kind of foundation Alex would have wanted.
He was a young man described by many as kind-hearted, caring and selfless – the type of person who, his father said, once had his car towed after leaving it unattended, only briefly, to walk around the corner to buy a homeless man in Paterson a sandwich.
That’s who Alex Sebahie was and this is a foundation those closest to him know he would be proud of.
“If there’s a kid out there in need, a family out there in need, really anyone in the wrestling community in need, send us an e-mail and we’re going to do what we can,” his mother said. “That’s what we want to do with this.”
In the last year alone, thanks to the work of Never Back Down, nine scholarships were awarded in Sebahie’s name and, additionally, singlets were donated to the Bogota/Ridgefield Park wrestling program.
It is all being done to keep the the proud memory of Sebahie alive.
“Alex had this never back down attitude about everything,” his mother said, holding back tears, just outside the Paramus gymnasium prior to the ceremony.
"He didn’t care if you were a state champ or if you were a senior and he was a freshman. He didn’t care how strong you were or what your record was. He just kept going. And that’s what we’re trying to keep going. We want kids to follow that mentality, for all kids to be strong, no matter what.
"We want Alex's memory to live on in this kind of positive light. That's what gives me, and our family, strength at the end of the day. Having people remember him for everything he's done."
Sebahie, who went on the wrestle at Rider University briefly his freshman year, was among the state's best during his high school days. His father is the first to admit Sebahie was never the most gifted wrestler technique-wise.
But what he lacked in technical skill, he more than made up for with his strength, his heart, his will and his undeniable refusal to quit. He truly was the ultimate competitor.
“He was the toughest kid I ever met in my life,” Paramus coach Chris Falato said. “And I’ve been around a lot of tough ones. Just the toughest, fiercest wrestler I’ve been around, but such a team-oriented kid, too.”
It all led to four state qualifying seasons, two Paramus sectional titles and a 121-14 career record as he became a member of the prestigious Paramus 100-win club, joining fellow former Spartan greats like Joe Trovato (158), Nick Alpher (139) and former state champion, good friend and former workout partner Kyle Cochran (143), currently a sophomore wrestler at Maryland.
“And he should’ve had even more, too,” his father said with a smile, looking up at the banner in the gymnasium honoring the program’s all-time wins leaders. “If he wasn’t getting hurt all the time.” 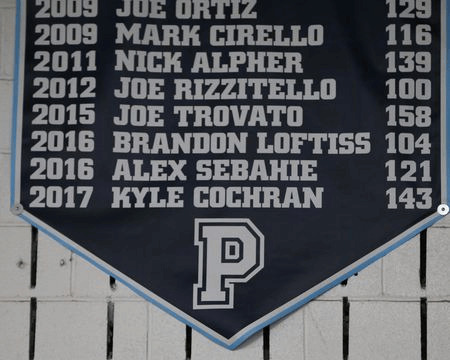 Alex Sebahie's name stands hung up on the banner that represents all former Paramus wrestlers with 100 wins or more on Alex Sebahie Night at Paramus High School on 2/7/20.Tom Horak | For NJ Advance MediaDespite battling multiple injuries, Sebahie still made four trips to Boardwalk Hall and twice reached the podium, taking eighth at 132 pounds in 2014 and sixth at 138 pounds in 2015. A late-season shoulder injury during a Region semifinal win his senior year almost certainly cost him a potential third podium visit.At far less than 100 percent, Sebahie – the No. 1 seed at 152 that year – withdrew after a second-round loss in Atlantic City, a 1-0 decision against an opponent he had beaten, 11-0, earlier that season.
"He just wanted to try," his mother said of her son, who very well may have attended Navy had it not been for that shoulder injury. "He had to try, in his mind."
Ironically, two of the four bouts Paramus won Friday against Paramus Catholic came at the only two weights Sebahie placed in Atlantic City at – 132 and 138 pounds, courtesy of Ardan Amora and Eric Freeman, respectively.
Another came courtesy of current state No. 1 220-pounder Kyle Jacob, who was never teammates with Sebahie, but the two knew each other well and, in fact, wrestled against each other during a Paramus practice shortly before Sebahie’s passing just over a year ago.
Keep in mind, Jacob had roughly 60 pounds on Sebahie at the time.
“[Alex’s] dad was telling this story of how Alex came home after they wrestled that day and just started eating and working out,” Falato said. “His dad was like, ‘What’s going on?’ And Alex just goes, ‘I just wrestled Jacob and he’s the strongest kid I ever wrestled. But I’m going to go back and beat him tomorrow.’ He was all motivated to get him the next day.”
True to his foundation’s motto, Sebahie never backed down – not well after his graduation and not to an eventual state runner-up opponent who had 60 pounds on him.
That was Alex Sebahie.
Now, it’s memories like those that the Sebahie family cherishes.
Even Friday, his mother walked the Paramus halls intermittently throughout the night looking back at commemorative plaques honoring her son’s past accomplishments, such as his individual state finishes and All-American honors.
“That’s all we’ve got now,” she said. “The photos and the memories.”
Gone but never forgotten, the memory of Sebahie will undoubtedly live on.
“I believe everything happens for a reason,” Issa Sebahie said. "And wherever he is now, I know he’s helping someone somewhere. People over the past year keep asking how I stay so strong through all this. I say it’s because I want to be as strong as he was. We all grow up trying to teach our kids something; he’s the one teaching me something.
“I want to live through him. Treat everyone with respect. Stay positive. Pay it back – like he would want. That’s what we’re all doing. That’s what this is all about.”
How can you get involved? For more information on the Never Back Down Foundation, please visit www.AlexSebahie.org to inquire further regarding scholarship applications, possible donations and contact info.
JJ Conrad focuses on the Super Football Conference and North Jersey Interscholastic Conference. He may be reached at jconrad@njadvancemedia.com. Follow him on Twitter, @JJ_Conrad.