152: Quarterfinal recap - He’s got no meniscus in his knee, but a semifinal showdown upcoming

152: Quarterfinal recap - He’s got no meniscus in his knee, but a semifinal showdown upcoming
https://www.nj.com/highschoolsports/2020/03/152-quarterfinal-recap-hes-got-no-meniscus-in-his-knee-but-a-semifinal-showdown-upcoming.html
Updated Mar 06, 2020; Posted Mar 06, 2020
1032020 NJSIAA State Wrestling Championships, opening round - 152
By JJ Conrad | NJ Advance Media for NJ.com
Aaron Ayzerov had two options and one decision to make.
A torn meniscus he had been dealing with for months had finally reached a breaking point at the Beast of the East in December, with the Paramus junior laying on the mat writhering in pain in a blood-round match.
"It locked again and normally I could unlock it," he said. "I couldn't unlock it this time."
Days later, doctors gave him two potential courses of action -- remove the meniscus completely for a few-week recovery and rehab stint, all but guaranteeing arthritis later on in life, or repair it and face a six-month recovery period, but have a healthier knee in the future at the cost of his junior season coming to a premature end.
The choice should have been difficult.
But you can probably guess which option Ayzerov went with rather easily.
"I just thought I've worked too hard and this matters too much," Ayzerov said. "I'd rather be wrestling now than in 40 years. I love wrestling too much."
Ayzerov may not have a meniscus in his right knee any longer, but he does have a 152-pound semifinal showdown upcoming - just three months removed from surgery - after a thrilling upset in Friday’s quarterfinals of the NJSIAA/Rothman Orthopaedics Wrestling State Championships.
Trailing, 4-0, into the third period against Bergen Catholic's third-seeded Alex Strashinsky - an opponent who got the best of Ayzerov in the last two Region finals and once last summer, two ending by pin - Ayzerov took Strashinsky to his back and landed a pin of his own in 4:20."Exhillerating," he said. "I've never beaten this kid. I wanted this one for so long. Every time I've faced him I've gotten closer and closer. I might not be the most technically skilled wrestler on my feet, but I wrestle at a higher pace, I'm good on the mat, I can wrestle and I break kids."

Trailing 4-0 in 3rd period, Aaron Ayzerov throws opponent to his back to win w/ a dramatic 3rd period Pin!! On to the Semis! Way to go Aaron! 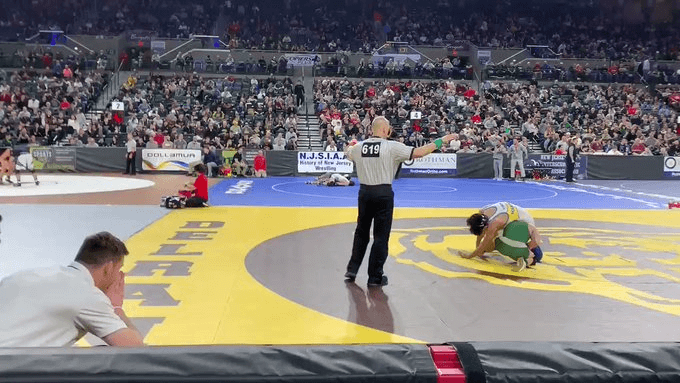 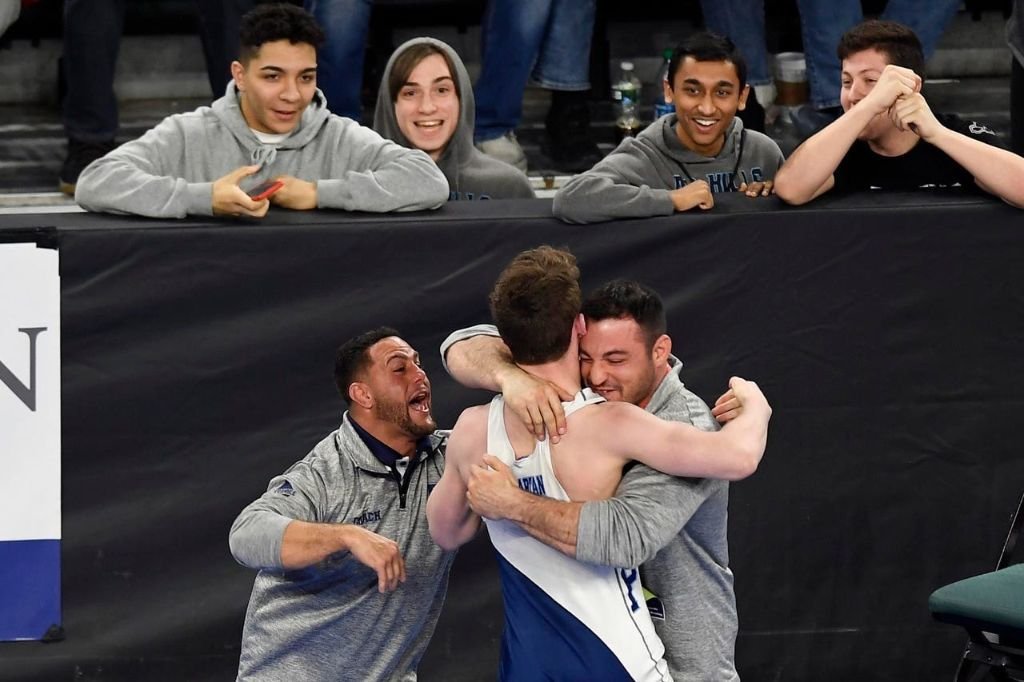 Ayzerov welcomed the challenge that was likely coming against Strashinsky when the brackets were revealed and he ended up on the same side and even happier when, on Thursday, Strashinsky came from behind and eventually pinned Delbarton's Colin Calvetti in the pre-quarterfinals to set the stage for Friday.
“Most kids wouldn’t want that,” Paramus coach Chris Falato said. "But he’s such a competitor and he said avenging those losses would make placing even sweeter. ... What he did with his knee, that’s the price he’s willing to pay as a wrestler on this stage. Wrestling is the most important thing in his life right now.
“But he’s still focused on not being done. He doesn’t want to just place. He wants to win it.”
Ayzerov will meet Camden Catholic’s second-seeded Brandon Mooney - a 3-2 winner over Pope John’s Mathew Garcia in the quarterfinals - later on Friday in the semifinals.
He is now two wins shy of becoming Paramus’ first state champion since Kyle Cochran won the 160-pound title in 2016 (Ayzerov’s teammate Kyle Jacob also remains alive in the 220-pound semifinals).
“I’m going to take five minutes and be happy for myself about this, but I’m not happy just placing,” Ayzerov said. “That’s not what I came here to do. I have a notebook I write in every day, ’2020 state champion.' So, this is not it yet. I’m not done.”
ELSEWHERE IN THE QUARTERFINALS
Top-seeded Dylan Weaver of Lyndhurst/North Arlington downed Shore’s Michael McGhee, 9-4, in quarterfinal action. Weaver, junior, is now two wins away from becoming Lyndhurst’s first state champion since Rutgers coach Donny Pritzlaff three-peated from 1995-97.
Weaver will meet Toms River North’s fourth-seeded Nick Boggiano, who downed Delsea’s Jared Schoppe, 6-0, in other quarterfinal action.